(Only some) Walls disappear using a bespoke render in a Viewport. Baffling empirical evidence! Has anyone else encountered this? Any thoughts?

It's driving me mad. To be fair VW UK  have been very supportive but cannot replicate this. I have attached a handy visual to describe my pain but I cannot begin to get the the source of the issue. Only started happening in VW2021 btw. I have not upgraded to 2022 as yet. Here are a few pointers:-

But then not all of the objects in the group/class/design layer(s) disappear. Only the walls, so the doors windows roof etc in the same group display. And even then it's a bit random! (see image!) Sometimes the walls are there, sometimes not.

3) Ok. It generally happens with 2 of our our bespoke renders. Which would suggest its a render style issue. But it doesn't happen with any other render style eg hidden line or OGL

And why doesn't it affect my client house using the same render style?

4) And here's the other thing. If I click and edit the viewport the disappearing walls return in OGL!

Any similar experiences/thoughts anyone? Thanks in advance! 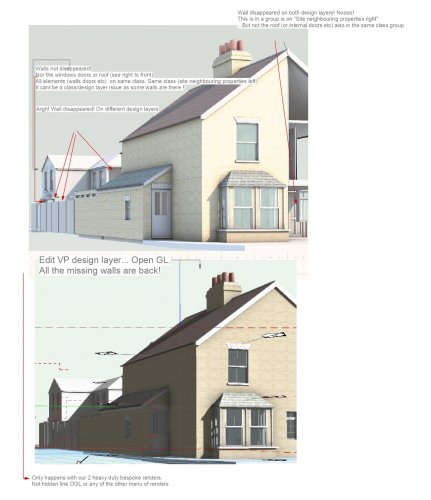