RW Cameras: hide outside of frame (aka blue crop corners don't cut it)

This is a request I’ve wanted to make for a number of years, but now that Cropped Perspective has been deprecated in 2022, this request has become all the more relevant and important.

An easy way to tell if 3D modeling software is worth its salt is the quality of its camera tool. Setting up camera views is a task relevant to ALL industries, and this process needs to be easy, intuitive, and informative. I wouldn’t describe the RW Camera tool as any of those things, personally, and at the moment I want to focus on one particular subject that is the most glaringly bad aspect of the current tool:

The 4 blue crop corners. They’re terrible. They don’t actually frame your view in a way that allows you to compose an image within the ‘viewfinder’. Everything outside of the camera view is still just as visible, and since the crop corners are so small and disconnected, your eye can’t visualize the frame in order to make informed decisions. Composing an image is arguably the most important reason to use a camera in the first place, so the crop corners fail at their most important job. 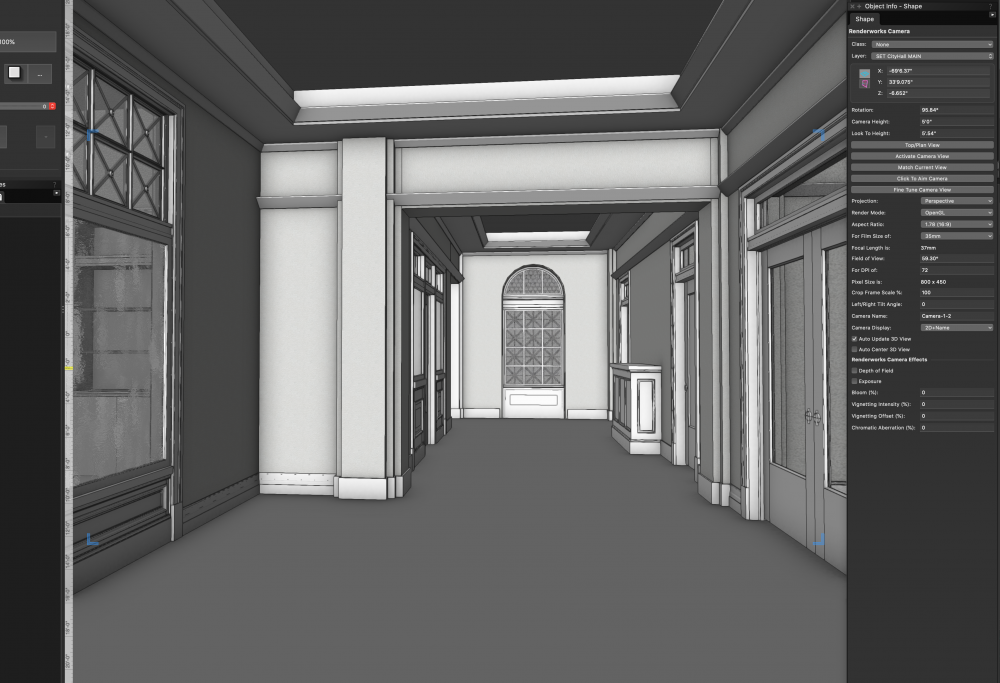 Spotlight’s Video Camera tool handles this slightly better because it uses a full rectangle instead of just tiny corner marks. However it’s still not ideal since the thick blue stroke is a bit distracting, and objects outside the rectangle are still fully visible. (Plus, using the Video Camera tool is not a workable solution in the first place.)


Ideally RW Cameras would work more like they do in Cinema 4D, where the area outside the viewfinder gets obscured with a translucent black overlay. That would be a million times better.

Vectorworks should apply this same approach. The overlay should automatically be visible whenever you're in an Activated Camera view, and go away when working in perspective (non-camera). The color and opacity of this overlay should be controlled in Interactive Appearance Settings (some people might prefer a solid overlay which completely obscures outside the frame, whereas others might prefer to have the overlay be more translucent or even be a color).

Prior to 2022, one workaround that sidestepped the camera’s unusable blue crop corners was to turn on the “Cropped Perspective” document preference.  This setting would crop the view to the camera frame so that objects outside the frame weren’t seen, which was helpful when composing shots. While it had its own issues, it at least functioned fine for that purpose. However, Cropped Perspective was deprecated for 2022 as part of the screen plane deprecation task. So moving forward we’re left with no good way to view a camera composition, and this should be addressed asap.

There are other improvements needed for the RW Camera tool but this would be the most impactful change.