By line-weight,
April 9, 2021 in General Discussion Good Morning I'd like to share with you the first in-depth experience with this new system, which I consider light years ahead of before, but which certainly, having been a long time and the t 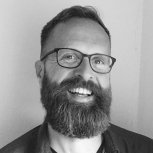