Pad and building in site model

I've hit another wall. Hoping someone can help. As the next step in this discovery phase on vectorworks, I need to set the building on it's site. So we now finally have an actual building. Rather than risk corrupting that file, I've created a separate site model document. Following the tutorial which was great I managed to build and contour the site, although it didn't fill in up to the edge of the site. Stopped at the last contour. But I can live with that.

After much trial and error and rewind of the tutorial I managed to insert a flat pad as a site modifier.

Question 1 - With the site plan built, how can you trace the outline needed for the site modifier pad? The site modifier pad needs to be tight to the building. I couldn't find any settings that et me see the tracing pad below? I need to get the pad in the right place and I can't see how, or find any tutorial on this?

Question 2 - Assuming that someone can help with the location of the site modifier in Q1, I have tried every type of pad for hours. Retaining, non retaining, I've tried varying elevations. But in every case it maintains the 'flat' of the pad and recesses where the contours are higher, which is cool and as we want, but where the pad crosses over contours that are lower than the pad it builds up the ground. In this case the property is on the side of a hill so we need to level it off and recess it where the contours are higher but not change the contours that are lower. That is just the view. Any ideas on how to do this?

Question 3 - All of this journey has been about trying to build a model as part of our architectural design to see if this tool is for us as a practice. So if I can get help on Q1 and Q2, so that I can let a pad in to the right place accurately, without building up where the contour is lower then we are ready to place the building into the pad location. I haven't been able to find any help or tutorial that addresses this point. I tried so many approaches but the only thing I've been able to get to work is to create a contour layer, elevate it lower than the buildings so the finish level of the pad reflects the finish floor level of the building.It works but its probably the wrong way to do it. Any suggestions on the right way?

Both question 1 and 3 relate to location of site pads. I guess theoretically if I could reshape the pad so that it was the right shape by dragging vertex but as you can see there are thousands. Not only that moving them would go across different heights too. When I tried dragging the whole thing messed up. I could possibly use the same approach if it worked to trim the pad to where the contour becomes lower but this just isn't feasible with this number of vertex.

Any help gratefully appreciated. Thanks 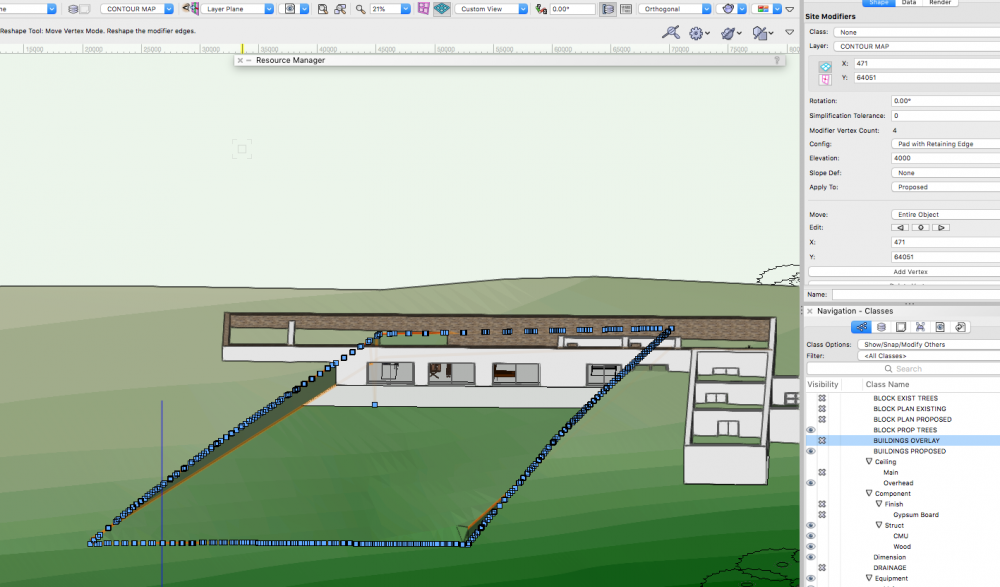