[EDIT: Note that much of this post is no longer relevant since the release of VW2021 which revamped all smart markers]

I know Vectorworks has stated over the last few years that its goal is to make tools more cohesive and intuitive. While there are many things that have improved, I need to call out the current state of Section Lines / Section-Elevation Markers as being a complete hot mess.

Despite being an experienced Vectorworks user, it seems like every time I use these tools I still get tripped up / irritated. And as a teacher of Vectorworks, when it comes time to explain the logic of these tools to novice users, it becomes apparent how desperately they need attention.

Today I sat down to gather a list of aspects that need improvement (I apologize in advance for the long post).

Confusing Point #1: There are two types of objects that do effectively the same thing, but have small differences: the Section Line and the Section-Elevation Marker.

There are other small differences, but in general I’m sure few people even realize both exist. All functions should be synthesized into one simple-to-use tool; there's no reason for them to be separate.

This is like the Rectangle tool drawing a circle. Not what one would expect… A tool should create the type of object it’s named for, like it does everywhere else in the program.

Confusing Point #3: When you have a Section Line object and Convert to Group, the result is a Section-Elevation Marker object.

So one’s kind of nested inside the other? I wanted a Section-Elevation Marker, so I have to draw a Section Line then Convert to Group? Not intuitive, and I can’t think of other tools that work this way.

Additionally, when you Convert to Group, any parameters that you’ve set up all get reset, such as end markers, text position, etc. That’s frustrating.

This also means that I cannot use opt+cmd+click to set the default attributes for future instances of either type of object. Normally you can opt+cmd+click on Plug-In Objects in order to pick up settings and/or quickly draw more of the same. [There’s kind of a workaround by using the Eyedropper Tool with Plug-In Parameters turned on, but this is made complicated by the points above].

There's no reason we shouldn't be able to use Create Similar Object.

Confusing Point #5: Aside from the two different linking functionalities described above, the two types of objects have mostly the same parameters but listed in different orders. 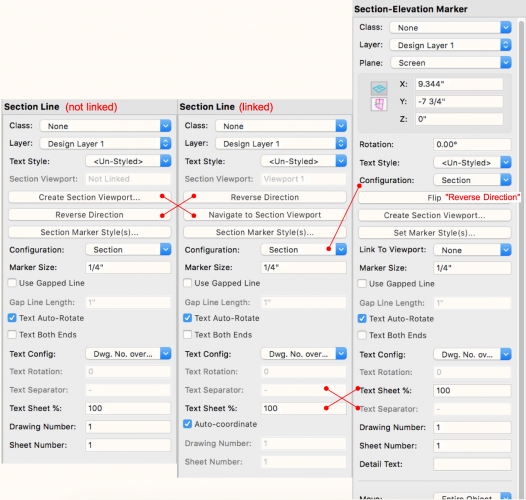 Neither order makes perfect sense, but they should at least be cohesive.

Parameters that control similar things should be near each other. For example, why are Text Auto-Rotate and Text Rotation not next to each other, when one literally activates the other?

Given that there’s no reason one tool couldn’t handle ALL the functions, here’s what the combined OIP could look like, including rearranging the order and adding some group headers: 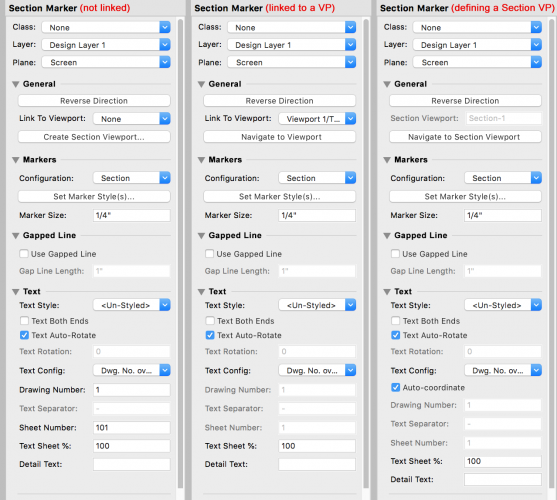 When you click the “Section Marker Style” button and choose end markers, it brings the chosen symbol(s) INTO the current file’s Resource Manager. However, the symbols aren’t linked in any way to the section markers in the drawing: editing the marker symbol doesn’t update any objects using that marker. There is no connection, so why bring in the symbol to the file in the first place? That’s very misleading.

And why use the “style” nomenclature if it doesn’t function like other style-based PIOs?

There’s also a bug where if you have multiple Section Lines selected and try changing the markers, it only updates one of the selected objects. If you want to change a bunch you have to change each one individually.

I'll leave it at that for now. [I finally learned today how this actually functions when using different geometry after years of being slightly confused].

It needs to be easy to make these two circles match:

Confusing Point #9: With both types of objects, clicking the “Make All Attributes By Class” button in the Attributes Palette flyout causes the entire bubble to be filled with color instead of white.

If you manually set each attribute to By Class it works fine, but if you use the flyout this bug exists. 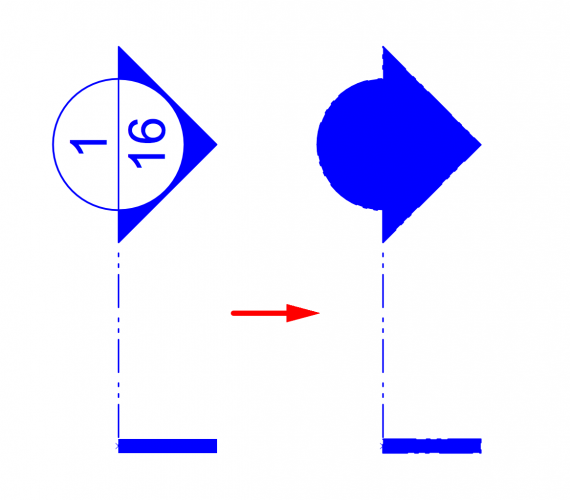 Confusing Point #10: Another tool, the Reference Marker tool, is often used in the same phase of annotating, but works differently. 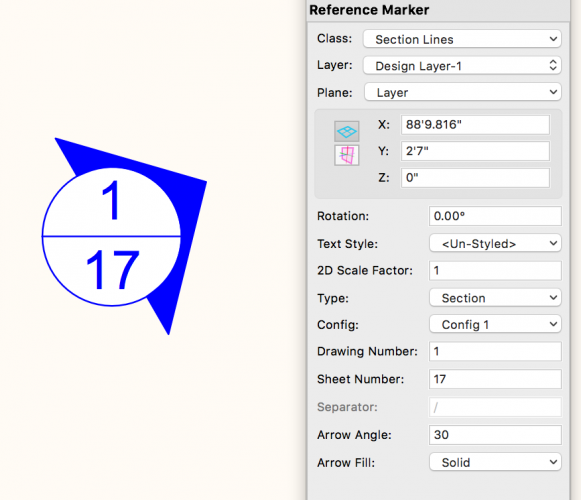 Instead of a “Marker Size,” is uses a general “2D Scale Factor.” I realize this is because this PIO draws the geometry while the other two object types are pulling symbols... But it just adds to the confusion since in the end you want the standalone markers to visually match the section line markers.

The Reference Marker tool should also allow you to link the drawing/sheet values to existing viewports like you can with the Section-Elevation Marker.

Someone on these forums once suggested using the Section-Elevation Marker tool set to Elevation with lineweight set to 0, instead of using the Reference Marker tool. However, then it becomes difficult to have markers at varying angles while keeping the text and divider line horizontal (another shortcoming of the current section line tools). The great thing about the Reference Marker tool is the "Arrow Angle" which causes the triangle to rotate while leaving the text and divider line horizontal.

I’m sure this was probably a bit confusing to read, but hopefully it's indicative of how convoluted it feels to use these tools. Indicating sections is fundamental to all industries, so we need an elegantly-designed tool that just works.