Hedge tool to allow multiple species, and staggering of the hedge rows

I have posted the following on the landscape section of the forum, but want to draw it to your attention as it contains a 'wishlist' request (in bold).

We are trying to create a hedge with multiple species in it, that is not simply linear (i.e. it  needs to turn corners) and use 3 staggered rows. Ideally we would like to use the hedge tool to do this for accurate numbers (landscape area tool appears to miscalculate because it is based on m² rather than linear m).

Hoping somebody might have a useful, reliable, workaround for this you can recommend please?

We referred the problem to Service Select, but their (very slow!) response was as follows:

There isn't a Hedge tool and the Plant tool can only plant an single species in one group, but you could create your hedge by putting lots of different plants together. Alternatively, the Landscape Area does have a Meters on Center option

There is a ‘hedge’ setting in the ‘Plant’ Tool, which is what we were referring to. It would be very useful if this could be developed to allow multiple species, and staggering of the hedge rows. Neither of the current workarounds provides a satisfactory and reliably calculated route to what Landscape Architects often need, which is a staggered double or triple row hedge of several species (e.g. a mixed native hedge) that is able to ‘turn corners’.

The ‘plant tool’ will not allow multiple species. Attempting to create a single species hedge in a ‘triangular array’ (staggered) with the plant tool does not work to display a hedge, it has to be done ‘along poly edges’ and then multiple rows displays as a grid, rather than allowing staggered rows.

The ‘Landscape Area’ Tool, although it will allow plants to be organised by ‘Metres on Centre’, doesn’t show them as staggered rows, and you have to draw planting by working out the depth to draw a shape depending on spacing and row numbers, then check against 3D view to see how many rows you have. This is not easily edited as ‘3 rows based on a line’ would be. It is arranged as a grid rather than following a path, so that anything but a straight hedge is particularly challenging.

Even on a small, simple scale, you can see in the attached screenshots that the calculated numbers are coming out at about 10% different for each of these workarounds. 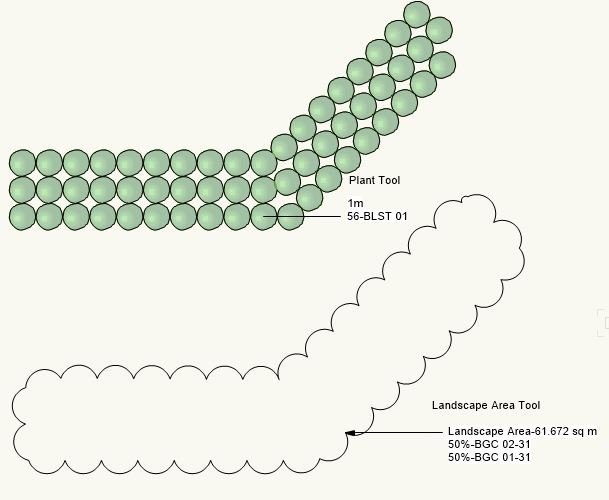 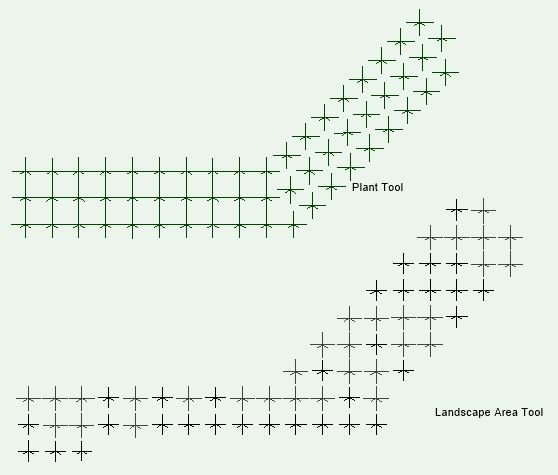