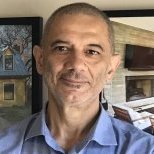 By Francois Levy
April 21, 2006 in Architecture